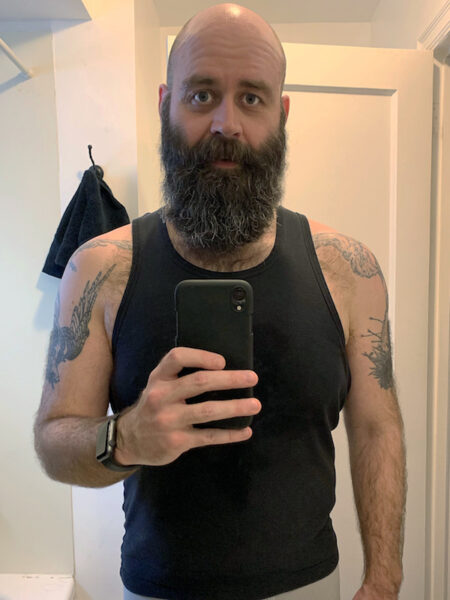 Well, it’s been a while…again, but I’m back at it…again! The truth is, last year was a long year, and I needed some downtime. I can’t say that I was giving my fullest effort every day, all year long, but it was enough of it to know that I needed a break if I wanted to continue this health and fitness journey in new year.

I needed the break not because I was pushing myself to the limit physically for so long, because I wasn’t… I took my workouts in stride and pushed just enough to know the effort was worth it. Just enough to make sure I was a little bit sore the next day or two. After all, my thinking tends to lean towards the workouts being effective, not crippling. There’s no point, in my opinion, pushing yourself so far that you can’t use those muscles for the next 4 days. That’s 4 days of not making any progress. Slow and steady is the style I like, especially considering I’m in this for the long run. Those 4 day recovery breaks can turn into week long lazy and excuse filled breaks awfully quickly if you’re not careful.

I needed a mental break

The real reason I intended to take January off is because I needed the mental break. If you’ve ever tried to go through this process in any serious manner, you’ll understand what I’m talking about. The mental side can take over your life. And to an extent it should. Being obsessive isn’t necessarily a great thing, but you absolutely need to have it on your mind, not just daily but several times a day. You have to plan your food, because you can’t just open the fridge or walk into a food court and assume there’ll be something available that fits your strategy. Even if you do roll the dice on a meal and make something work, that often meals you have to rethink the next meal because of it.

On top of all of the nutrition planning aspects there’s the physical planning aspects as well. It takes a lot to plan workouts. Now, some people can just set a weekly routine and do that same thing for a month or two and be quite happy with that, but I’m not one of those people. As with food, I need variety in workouts as well. it just gets boring so damn quickly if I’m doing the same thing week in, week out. I don’t mind having a plan, but I do like to change it up every couple weeks, at the longest. But again, that planning takes consistent and ongoing effort.

All in all though, last year was a very successful year, and all of that effort was pretty much worth it. I didn’t quite get to where I was hoping I’d be by the end of the year, but I wasn’t that far off. As far as the scale goes, I was only about 5 or 6 pounds away from my goal weight. I’m not upset about that at all. In the end I was lighter than I’d been since my mid-twenty’s (178 lbs) and was in better overall shape in probably about the same amount of time.

Now, I only intended to take the month of January off, but somehow it turned into the entire first quarter of the year. Oops, my bad. I tried to get it rolling again at the start of February but just couldn’t make it stick. Then again the same thing at the start of March. I’ve never really felt the whole “winter depression” problem as hard as a lot of others do, but I definitely get the “winter lazyasfuck” shortly after the halfway point. By late January I start to become generally unmotivated, and if the bitter cold hangs around a little too long I actually start to become mildly, yet consistently, angry. I hope I hide it well. Maybe I don’t.

But now I’m through all of that. There’s been a few half decently sunny and very slightly warm days over the last couple weeks, and I know even better weather is on its way. No time like the present to get my ass back in gear, and start this machine up again.

So far I’ve decided to just do any workout that I feel like doing. No structure whatsoever. Just whatever my body feels like doing, thats what I will do. I’m going to mentally ease myself back into the routine, and these unstructured workouts are a great way to do it. After all, any workout is better than no workout. It won’t take more than a couple weeks before I feel like I’m really back into it, and can start to plan out something a bit more structured.

I think I should wrap this post up now, it’s getting a bit longer than I intended. Next time I’ll touch on my nutritional plans a bit. I will say this though… it’s something that comes a lot more naturally to me, and is a lot easier than I found the keto diet to be. It was very effective, but was just so much planning and time spent on meal prep. But as I said, I’ll get more into that next time.

Before I go though, I want to sincerely thank those who have reached out over the course of last year to offer words of encouragement, and some that even asked for tips! That blew my mind. I never expected to inspire anyone by doing this, so that is actually the most encouraging aspect so far. I started doing this simply as a way to hold myself accountable. I figured that if I made it public (even on a very small scale) that I’d be much less likely to just quit or “fail”. And it did work! It kept me going and considering I’m writing this very post, it’s still serving it’s purpose over a year later. So, thanks for the help! I appreciate it more than you know!