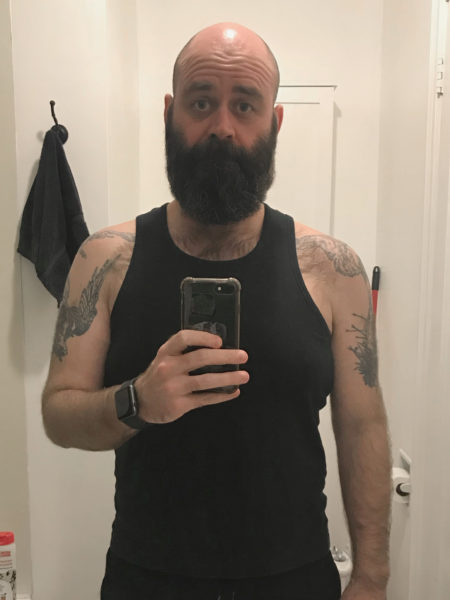 So here I am at the start of week three of this attempt at keto health and wellness. These last two weeks of combining the ketogenic diet along with intermittent fasting haven’t been pretty, but it’s really only the first 2-3 days that are tough. The reason I say it like that is because I completely fell off the ketogenic wagon on the first weekend, and then again for about half of the day this past Saturday. I was at an event and there was triangle sandwiches. No one turns down triangle sandwiches!

Maybe I had a few too many. And then maybe I also hit the baked treats a little bit too. It’s funny how your mind works when you decide to make changes like this. It’s definitely no small change but once you’re a few days into it, it’s actually pretty easy. So why is it that I feel a “reward” for my hard work and dedication is the one thing that will literally knock it off track.

Over the course of those two weeks I managed to get in at least some cardio each morning. I have a spin bike and treadmill here at home, which makes it so much easier to get the morning workouts in. Exercise in the morning isn’t something I have a hard time with, but it’s highly unlikely that I leave the house to do it, so it’s great to have them.

I usually would ride/jog for between 20 & 30 minutes, depending on how much time I had to spare. On week two I started to add in pushups to finish it off. I know I’m capable of more, and I know I should be doing more, but I always need to ease myself into the routine. It’s almost like I need the activity to start making me feel better before I realize that more of that activity… always makes me feel even better. Don’t ask me why, I don’t know.

So this week I’ve decided to include a fairly quick strength building routine to go along with the cardio. Pushups, of course, plus something for the shoulders, and a little something for the abs as well. I’ll rotate through some things throughout the week to ensure I hit the whole body at least once. For a while now I’ve been a big fan of body weight exercises with some dumbbells mixed in where needed.

Is it lunch time yet?

I have to point out the surprising, if minimal, benefits of skipping breakfast. Not only does it free up some very valuable pre-work time each day, but it actually saves some money. The non-Keto me is a big fan of the Tim Hortons Everything Bagel (double toasted with butter, so good), but on Keto, that’s just a pipe dream.

The thing is, the financial savings isn’t just the bagel, but it’s the coffee too! I rarely ever stop for just a coffee, so for the past 2 weeks I’ve just been making my coffee at home and taking that to work with me. I know it doesn’t sound like much, but if I bought the coffee and bagel every day, that’d cost me close to $20 each work week. That’s $80 a month! When I read it like that, it makes it a little easier to just skip the ritual entirely.

For my lunch most days I’m having a salad with chicken. I like to rotate through a few easy combos just to keep the flavours interesting, but the “chicken and lettuce” base is usually pretty standard. Most days I’ll bring a couple pepperoni sticks with me just in case I need something before I get home. Don’t worry, I have Pur gum at my desk to get rid of that smell. I’m not that guy at the office.

But how about dinner?

A couple times I got a little adventurous at dinner. I made stuffed peppers a couple nights, and another couple nights I made a beef pot roast that I grabbed at Costco. But mostly I had… breakfast! Breakfast is my favorite meal, so to cut it out in the morning, I am more than happy to add it back in at dinner.

The great thing about breakfast is bacon and eggs are great additions to the ketogenic diet. I’ve also been using Carbquik (liberally) because it was recommended by a friend on this same journey. I won’t speak at length about that stuff right now though because I’ll probably end up writing an entire post on it. It’s a bit of a game changer, for anyone interested.

So, at the end of two weeks of about 60%-70% effort, I’m happy to say that I’m down about 5lbs. It isn’t the miracle that some people report in the early stages of starting Keto, but I’ll take it. Less is less.

This week I intend to put more effort into the morning workouts. If I can sneak in a little extra after dinner one night, then I will. I like the activity anyways, so it’s not always a chore to me.

In closing, I want to know if anyone reading this has tried the ketogenic diet before, and what would you say are your biggest tips you could give to a newb like myself.